Just thought I would take a minute to say “hi!” while stock is simmering away on my stove in preparation for cooking dinner.

I’m not entirely sure where to begin….my last post stopped where my Daniel and I had both agreed that a formal courtship was where we were headed. We had been seeking the Lord as to where He would lead, and were very comfortable continuing to get to know each other.

His visa waiver expired last September, and he had to fly home to Australia. We planned for him to come back in October, but when he arrived at LAX, they sent him back to Australia. According to the U.S. government, it was too likely that we would get married on the visa waiver, which is not allowed.

With his visa waiver rights revoked, we began a series of discussions with my dad, with our now-lawyer, with other folks who had done international visa processes, and prayed a whole lot! With new information in hand, it was decided that we would pursue a fiancé visa. 🙂 We became engaged on October 21st, 2016. This caused a bit of confusion for folks who didn’t know what we were doing, because the first question was always “where’s the ring?”, haha! The response I would typically use most of the time is that the country didn’t allow my fiancé in the country to put it on me yet! ;D

Fiancé visas are a bit tricky- they require a LOT of paperwork. Like, a LOT of paperwork. The stack of paper I mailed to Daniel for the interview at the consulate was easily 6″ tall! After you fill out the necessary documentation, you also have to prove that you have a bona fide relationship with the foreign fiancé. This meant that we had to send them copies of all of our emails, texts, phone records, etc., and include photos of us together, letters stating our intent to marry, letters from friends who observed our relationship and knew that we were wanting to get married, etc. It was a LOT of work! We got everything filed in December of last year, and then began the long wait on the government to get their act together.

On April 12th, 2017, we received the news that our petition had been approved!

How we told Daniel that the petition had been approved

It was time to wait on an interview date, which ended up being July 25th, 2017. Daniel was nervous, I was nervous…everyone was nervous. It was the moment of truth….and up to the Australian consulate as to if we would have an approval or not!

After hours of waiting, I got a very happy text from Daniel….APPROVED!! It was time to make travel plans. 🙂 The only thing I could think over and over again is about how good God is. I will never understand all the reasons why we had to wait on the visa as long as we did, why Daniel was denied entry in the first place, etc. I’m sure there are countless other reasons we won’t know on this side of heaven, but one thing is for sure and certain: God’s timing is best. God leading us together in the first place, God having us both wait to bring us to the point of marriage, God putting together each and every detail before we were ever even born…His timing is perfect. <3

There are no words to describe what it was like just to *see* him again, much less to be able to interact in person once more. <3 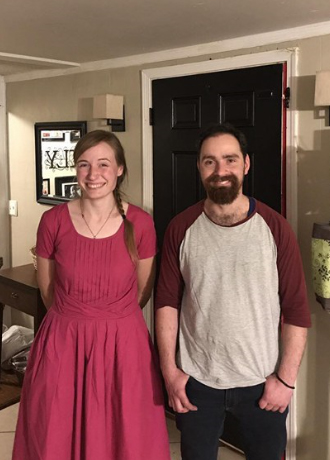 First photo after being reunited!

We spent the next week or so just enjoying the time together. It was so indescribably good to be back with my darling again. Long-distance relationships are hard. They test every ounce of patience in you. I am thankful for my Lord, who listened to the many late-night prayers and tears shed while praying over the process…I’m thankful for my parents, who would listen to my ramblings and hold me while I cried. I’m thankful for the friends who would text just to make sure I was doing okay, and ask how they could be praying- y’all know who you are, and your friendships are an immense blessing to me.

The next post will be about our marriage ceremony preparation and some of the special things that happened as we were counting down to the big day. Stay tuned!