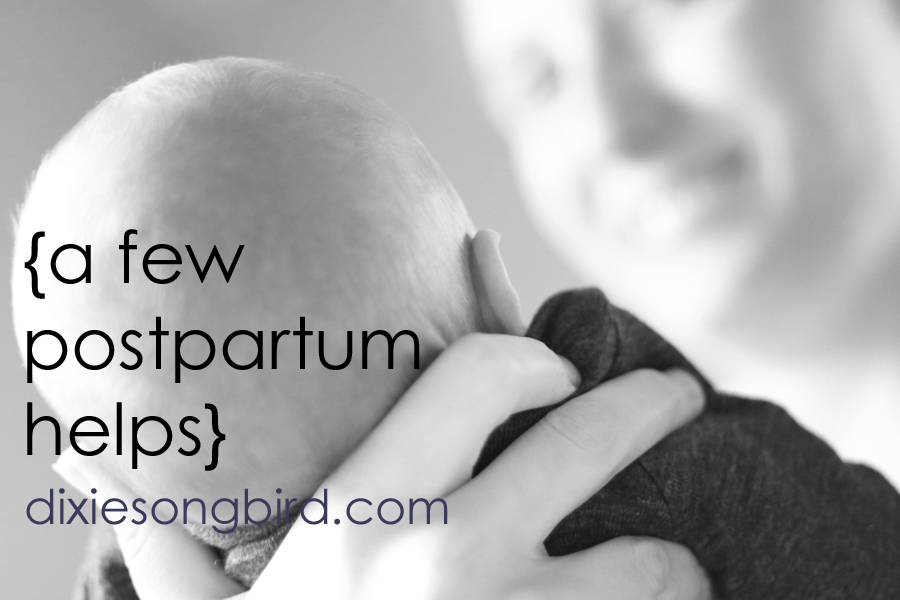 Hello friends! I wanted to quickly take a minute to blog a little about some things that I have found indispensable during the postpartum recovery time, while it’s still somewhat fresh in my mind. 🙂 I realize that this is the first baby I have brought home, but I do think that these suggestions might be helpful to other moms, as they were a huge blessing and help to me! 😀

Freezer meals! One of the things that was immensely helpful to me was having some meals put away in the freezer for the time after Daniel went back to work. We were blessed and were able to have him home for several days due to changes going on at his job, in conjunction with holiday off time and vacation days, but even so, I was so, so thankful for those meals in the freezer!! I put away as many as I could, and then my sweet mama delivered several others. It was so nice to not have to worry about what we were going to eat while I was still working on getting back on my feet! There were also some wonderful friends of ours who delivered meals and even sandwich fixings after we got home from the hospital. That was such a HUGE blessing!

If you tore at all during delivery, the Earth Mama Herbal Perineal spray was so wonderful! I was alternating using it and spray Dermoplast. I felt like the tear was healing much faster than what I was told to expect from my doctor’s office, and I think this spray is really what made the difference.

After things settled down and we were ready to start going back to church, I realized that none of my church clothes fit at all. They were all either maternity and too big, or pre-maternity and too small. I found these dresses on Amazon, and for the most part, they have been AMAZING and not terribly expensive.

I ordered this black one:

I also ordered this burgundy one:

And this blue one:

The black one and the burgundy one have been great, but the blue one, while comfortable, developed fuzzballs on it really easily, and I’d only worn it three times. I’m going to get a clothes shaver and see if that helps, but that was disappointing. I’ve worn the black one and the burgundy one several times, and they both seem to be holding up really well. They have been awesome for nursing and have been very forgiving of my post-pregnancy shape.

My mom found this awesome Epsom salt rub at Walmart several months ago, and it became a lifesaver for my backaches while I was pregnant. After I had the baby, it still felt so good rubbed into my back. It also was the most effective thing I used to treat the dreaded “h’s” that showed up after pushing for so many hours. That isn’t what is was labeled for, but I found where someone had tried that in the Amazon reviews and decided to try it myself. LIFE CHANGER, folks.

I also realized a few weeks after bringing our little guy home that I was dealing with some baby blues. Mom suggested increasing my vitamin D consumption, so I did that and noticed a huge difference within just a few days. If it had been more sunny outside during that time, I would have also been soaking up as much sunshine as possible.

After the 6 week mark, it was time to start working in some exercise routines. We’ve been using Dr. Oz.s 7 minute workout here, and I’ve been alternating a few of Leslie Sansone’s 1 Mile Walk-At-Home videos (also on YouTube) as well. I realized when pushing that I had very little upper-arm strength, and I’m also trying to work on getting rid of some of those extra pounds I put on during the pregnancy. I haven’t lost a whole lot of weight thus far, but I can definitely see some muscle definition and toning making an appearance, and that makes me really happy. 🙂

The other thing that was really helpful was transitioning Oliver onto as much of a consistent sleep routine as I could. We follow the EASY baby schedule as much as possible, and it’s truly been awesome! He actually prefers to sleep in his bed, and throws the biggest fit if we’re out-and-about and it’s naptime. 😀 He sleeps in his bed overnight, and he usually wakes up when we are getting Daniel out the door for work, so I feed him and put him in bed next to me for morning snuggle time before we start the day. He loves his routine! I know that we’re rapidly approaching that 4 month sleep regression time, but I’m sure enjoying the good rest we are getting right now!

I sincerely hope some of this will be of help to you. Many blessings on this rainy spring day!
~Mrs SuperShevy